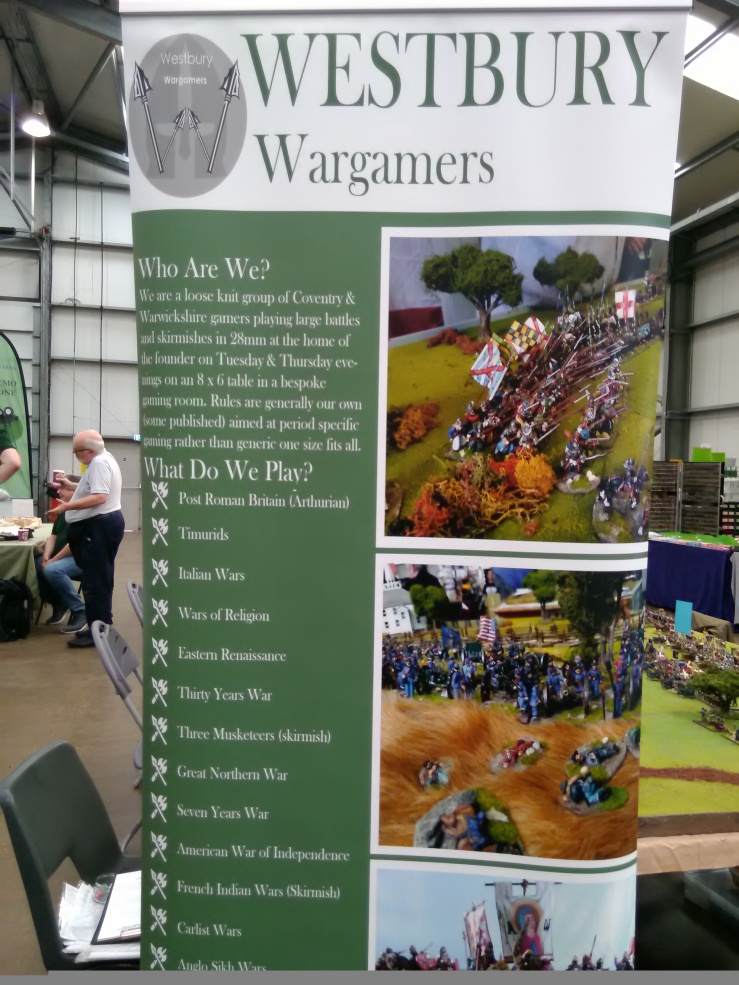 It’s been a little while since we’ve attended ‘The Other Partizan’, the early date clashes with holidays and shift patterns are more difficult to negotiate, but this year it all came together so we thought we’d do a ‘classic wargame’ and wheeled out the C18th collection, but with a twist; War of the Austrian Succession in Italy. This period and theatre has always fascinated me ever since I read Spencer Wilkinson’s ‘The Defence of Piedmont’ which in turn was recommended in a Peter Wilson article in Wargames Illustrated years (and years!) ago. We decided we would do a battle from the campaign on the way back from the first Partizan, we just needed to decide which one, which in turn meant which one do we have most of the troops for? The best fit was Madonna Dell’ Olmo, a set piece battle fought on September 30th 1744 and featuring all the main protagonists; French, Spanish, Piedmontese, and Austrian but did we have enough? The French were easy, our long standing collection had all we needed, Spanish we had a semblance of a force but cavalry we had nothing 😦 , Piedmontese we had a significant force from when I first got into the period and Austrians we had a plenty. Undeterred we sent off the forms and then quietly panicked!

Knowing we needed to get some metal painted we analysed the battle over the course of an evening rather than playing and realised that the significant Spanish presence was in the town of the Madonna itself on the right wing and out on the left wing where their cavalry were deployed, yes there were infantry battalions deployed alongside their French allies in the centre but neither nationality out shone the other so we could deploy an all French centre and not unbalance the recreation. Best get painting then! The hero of the painting spree was Dave who was absolutely on fire working his way through unit after unit and then rattling off a whole load of Spanish and Piedmontese generals – thanks mate! The completion of some Piedmontese & Spanish artillery rounded off the new stuff and we were ready to go.

In terms of the battle itself little is recorded other than Wilkinson’s narrative and that is only a couple of pages. What we do know is that the Prince of Conti as overall commander of the ‘Gallospan’ army was besieging the city of Cuneo planning to use it as a base of operations for the following spring’s campaign, however he was acutely aware of the main Piedmontese army to the north at Saluzzo which could undo his plans so he detached a strong corps to act against that. For their part the Piedmontese, under Charles Emmanuel III, knew that if they could prolong the resistance of Cuneo into the winter the allies would have to give up and retreat back over the Alps and start all over again in the next season. So, the Piedmontese marched on the city and the allies formed up to receive them; an unplanned assault on the town by the Austrian light troops precipitated a general advance by the Piedmontese and the battle raged for several hours with the allies getting the best of it and forcing the Piedmontes to yield the field. However the battle had been enough of a distraction for the Piedmontese to funnel troops and supplies into the town and so a tactical defeat became a strategic victory; the allies continued the siege for a couple more weeks but the arrival of the autumn rains made prosecution of the siege impossible and they retreated back over the Alps. 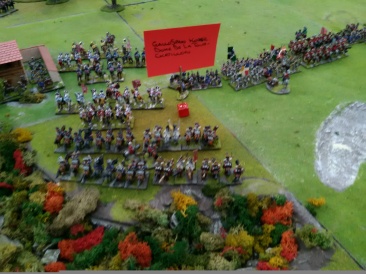 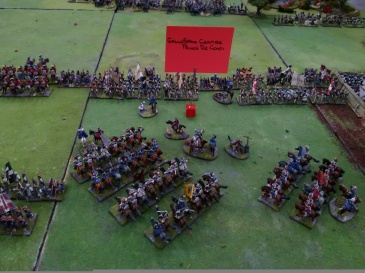 For our re fight we mirrored the actual dispositions as near as we could, Wilkinson includes a detailed map in his book which when we photo enlarged gave us a an excellent guide as where to place troops. On the day the allied plan was very simple; hold all along the line and let the left wing cavalry do the work by attacking their opposite numbers and then pressuring the infantry as it came on. The cunning Piedmontese plan was for their right wing cavalry to seek out their opponents, mainly to keep them off the infantry, and for the infantry centre to attack in two lines, one moving off after several turns of bombardment and then the other after the first line had put some distance between them. The Austrian lights were to occupy the defenders of the town enough for them not to send reinforcements out to the main battle.

The early part of the game was all about the cavalry; Garantia’s brigade galloped out to take on Castagnole’s brigade who, although half the size, were far better quality, comprising the Garde Du Corps supported by Austrian Hussars and in a moment of rashness the first Spanish unit in was their own Hussars who were roundly trounced by the Garde and their flight disorganised the whole of Garantia’s brigade who ended up beating a retreat as Castagnole pressed his advantage. This whole wing then took on a life of its own for most of the day as Castellar committed his brigade to halt Castagnole who duly fell back to be replaced by Requensa who then had to be seen off by the French horse under Savines; two further Austro Piedmontese brigades under Della Villa & Della Manta were comitted and the French dragoons of the first line under Chevert. In total we had 21 regiments of cavalry swirling around, meleeing, fleeing, rallying and returning which although hard work to manage from a rules administration point of view was just what we wanted the rules to do, so result. 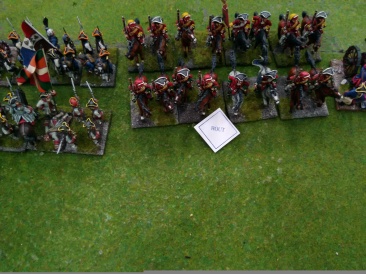 The infantry centre was the grind we expected (much like the real thing) but in delaying the advance the Piedmontese commander made a fatal error, the artillery achieved very little at the long ranges and of course once the infantry got going the more numerous French guns made holes in them at the shorter ranges so by the time they got into musket range several battalions were in no state to sustain a firefight. With all the time in the world this might not have mattered but as everyone knows you never get as many moves in at a show as you might in the calm of your home venue so the arrival of the second line was too late, it was time to pack up. It did look pretty though! 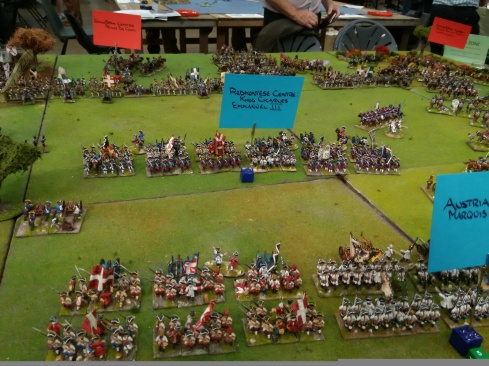 How was the show itself? Couldn’t tell you! I managed a quick tour to say hello to someone, pick up some trees from Last Valley and some figures from Empress and then that was it; there did look to be some cracking games and would have loved to sit and watch for a while but that’s the curse of running a game 😦

Many thanks to all those who stopped by and passed favourable comments, many thanks to the organisers and hopefully see you next year!