Back in July the weather was good and all of us were available in the day so we decamped to the bunker and gamed on the big layout where AWI was the order of the day. 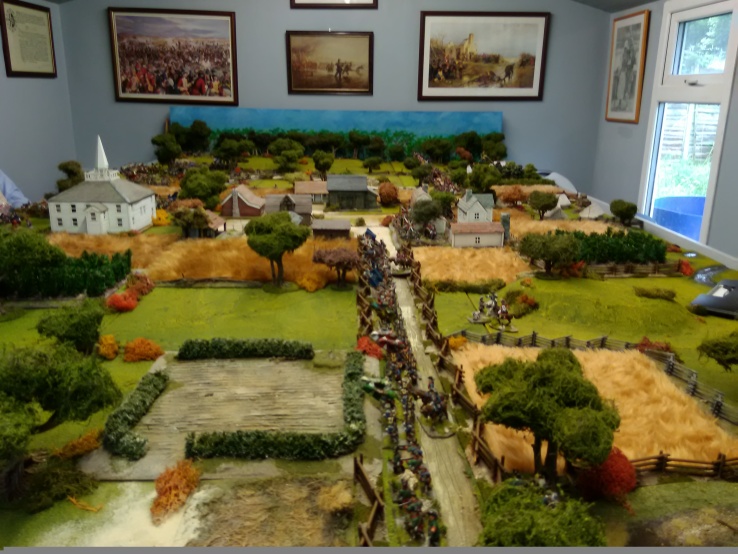 On reflection we might have bitten off more than we could chew; Germantown is a big battle by AWI standards, around 9,000 combatants per side and reflects Washington’s tendency to over complicate matters.

In the historical encounter Washington divided his forces into 4 columns with orders to launch a pre-dawn co-ordinated bayonet attack on the British forces camped around Germantown. Like all ambitious plans things went awry fairly quickly, dawn found the Americans far short of their intended jump off points and the centre column ran into the British piquets who sounded the alarm and then fell back to Chew House from which they defied the Americans for the whole of the battle sucking significant numbers into a vain attempt to evict them, those American units of the centre not distracted by Chew House engaged the now alerted British all along the line but apart from a couple of local successes made little headway, out on the flanks the American militia found themselves facing the Queens Rangers & Guards on one flank and the Hessians on the other, unsurprisingly neither attack made much headway. With losses mounting and the primary objective of driving the British from their positions fading Washington ordered the retreat and was followed up by the British for several miles. Although a tactical defeat the tenacity of the Americans had a profound effect on the courts of Europe, the French in particular expressing their support.

Our re-fight commenced with the 40th foot and some light troops deployed inside Chew House and the the Americans deployed in line abreast across the playing area, the British were similarly deployed along School House Lane. The American players diced to see if they would just mask the position or divert a brigade to attack, they attacked and that was the story for the whole of the day’s play with the 40th being driven out, rallying and returning on multiple occasions before the Americans could themselves get organised enough to take the building, one Continental unit, the 4th Virginia in fact ignominiously leaving the field.

The first proper action came on the American right where Armstrong’s division came down a a wooded slope into range of Von Gahl’s brigade who opened fire with the jaegers and then a full scale fire fight gradually gripped that end of the battlefield.

Working along from the American right the Continentals slogged through the terrain – built up areas and fields are always slow aren’t they? to eventually engage the Hessian and British line troops along the road which eventually saw the British giving up the road and defending from the fences behind. In the town itself the piquets were driven from their forward artillery position and that part of the town cleared creating a gap between the British regulars and the Guards out on the far right.

The advance of the American militia out on their far left was cautious, mainly because the player knew what he was facing, so it wasn’t until well into the action that they actually approached the Guards and engaged in a firefight; not surprisingly they came off worse and when we called time later they were in a frightful mess but it had prevented any of the Guards being diverted to counter the Americans in the centre. 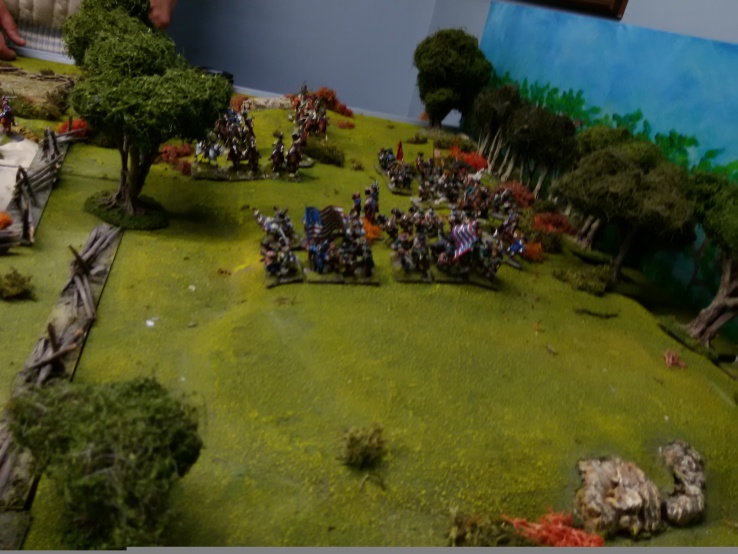 Back in the centre the cavalry we had allowed the Americans to deploy made a valiant attempt to unhinge the weakened British centre right with some bold attacks but the terrain and British firepower were against them and they eventually fell back much to the relief of the British players.

Out on the American right the opposing jaegers were driven in and the Americans started to turn the position but the militia were now all played out and certainly couldn’t effect any kind of impact on the Hessian’s who turned their end battalion to protect the flank creating a stalemate that lasted until time was called. 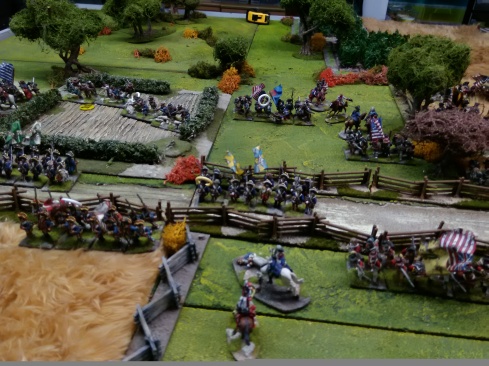 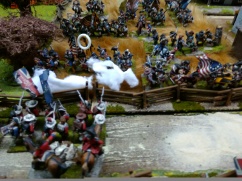 In the centre the firefight was furious with units on both sides falling back due to heavy casualties but the Americans just couldn’t punch enough of a hole to drive through and when time was called they just didn’t have the reserves to exploit their gains, that said the British were in no shape to conduct the pursuit of their historical counterparts so maybe our George Washington did better than the historical figure?

Other than having the fun of getting the AWI on the tabletop after a long absence did we learn anything? Well yes; exciting though battles such as Germantown may be to read about, recreating them for enjoyment on the tabletop is far from easy, battles that contain built up areas and extensive terrain features are difficult to play over regardless of the rules you use and sometimes you just have to accept that. Equally battles where chance and weather played a major part – the fog seriously hampered the Americans at Germantown but we decided to ignore it for simplicity which in retrospect made their attacks more co-ordinated than they should have been, can never seriously be re-created. Did we enjoy it? Well yes and that probably is what its all about.