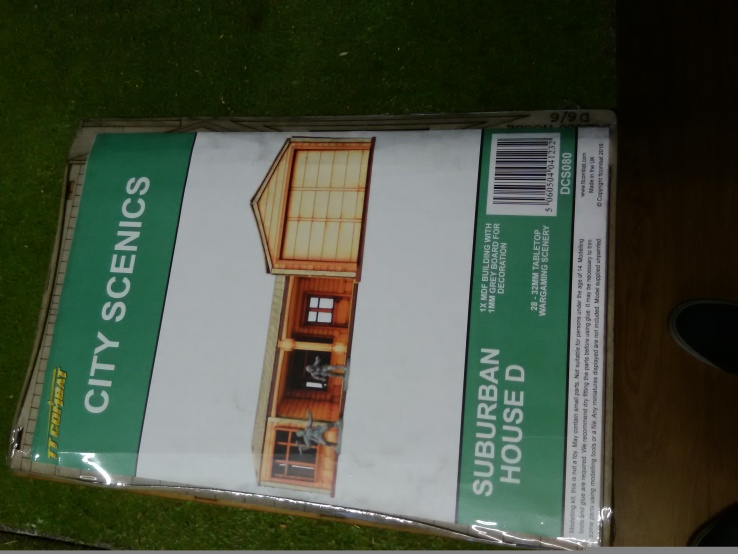 This project is taking way longer than it should be and the main reason is buildings. Over a year ago when we started it all seemed so simple, use the Sarissa South Of The Border range plus some from the City Block, bang them on some 2′ x 2′ mdf boards and away we go! We even spoke to Sarissa at the last Deby show and ideas about modifying the city blocks to look more ‘south of the border’ were discussed but time moved on, they were busy expanding their ranges we got sidetracked by other projects, blah, blah, blah.

Since then we’ve (well me) had a lot more experience putting together mdf buildings and have come to realise there are a lot of people out there producing buildings one of whom are TT Combat and this post is a run through of constructing one of their buildings and a comparison with the project favourite Sarrisa. 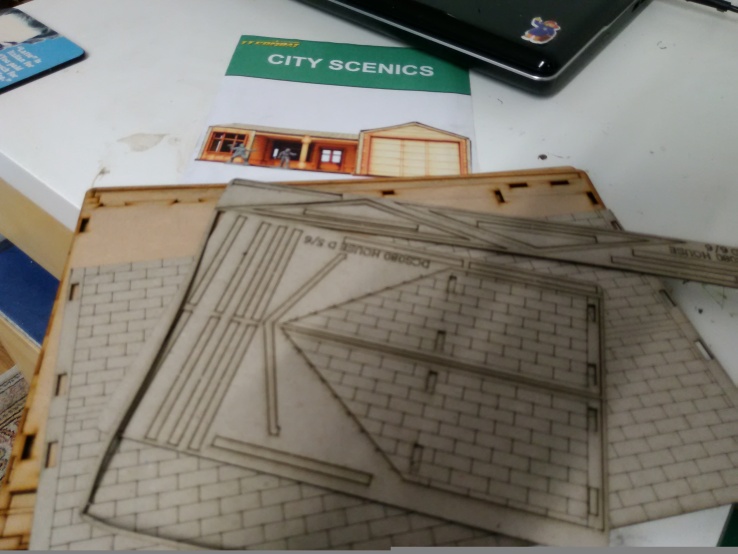 I decided to go for one of their Suburban House models (D in this case) mainly to see if it would work as a boss house (although the two storey version would probably be better but best not to get carried away yet) and if it doesn’t then maybe a stand alone piece for an FBI/DEA raid in a different game.

There was nothing different about the received pieces, all ready to be punched out from their frames, but in this example (and I’m assuming all similar TTC products for now) the roof is etched cardboard – interesting. I also punched out all the doors but you could leave these in place as I just ended up gluing them back in place; I guess the option is there if you want no doors or permanently half open. 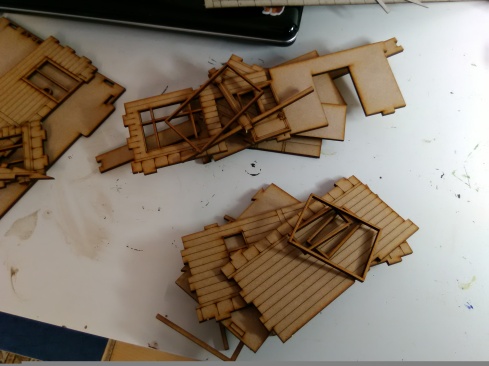 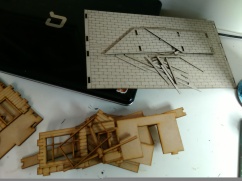 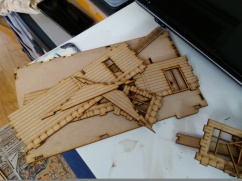 Once punched out, and nearly all pieces came away clean, I ended up with three piles, one that seemed to be the floor and walls, another which looked like internal walls and another I couldn’t make out – in fact it was the garage. As usual with all manufacturers, no instructions, so over to the TTC web site which had nothing other than assembled pictures from various angles which was a good job as it wasn’t entirely clear where some pieces went. 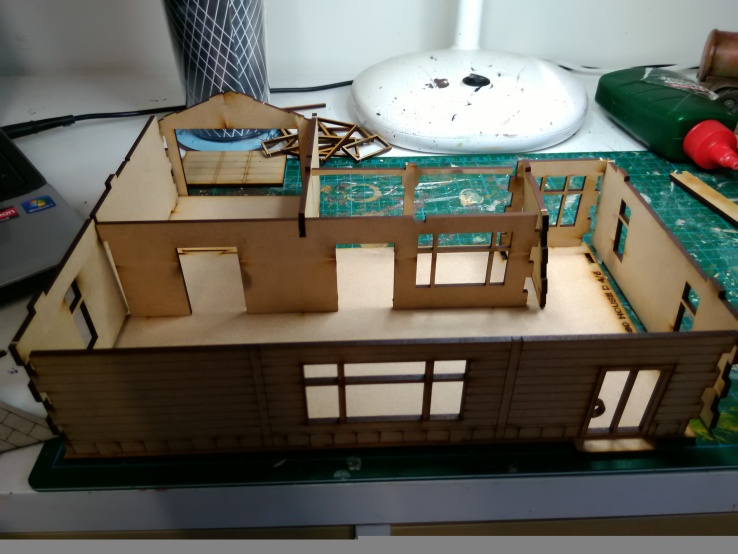 As usual I dry built the assembly which showed that there were no internal walls rather an outside wall against which goes the garage and porch; I did briefly play around to see if you could do without the garage and the answer was no (unless you wanted it to look crap) and anyway TTC do a version without garage. 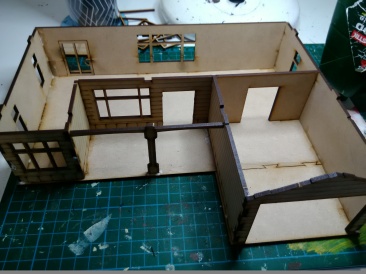 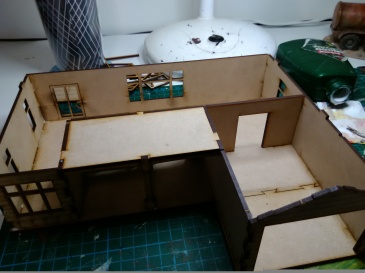 Next step wood glue the basic frame including the porch roof – mistake if you want to paint the building. As always with so many inter connecting lengths no sooner have you glued three pieces than you need to prise them apart to fit the fourth; I have found this with every vaguely complex assembly I’ve done and can’t find a way round it. 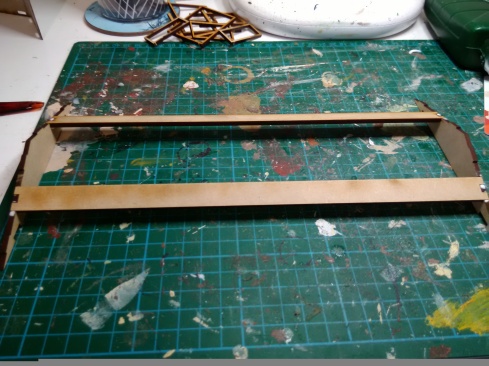 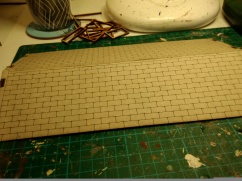 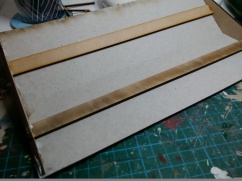 Next was the cardboard roof and for a while I was a bit stumped; the main roof is a piece of grey flat etched cardboard (nice job) which is shown as pitched on the TTC item page with the garage roof butted against it (a similar small oddly shaped piece of grey cardboard) but how does it pitch? Like all solutions when arrived at it was blindingly obvious. There are two straight mdf ‘rafters’ which glue to the roof to give it a bit of strength and these then click onto two gable end sections which in turn sit onto lugs on the end walls of the building. I tried various versions, permanently fitting the gable ends to the building with the rafters but this is asking a lot of the cardboard to conform to shape and makes it awkward to reach in to the building, fitting the rafters to the cardboard and then to the gable ends but too many things to line up, in the end I glued the rafters to the gable ends then scored a light line along the centre of the cardboard and bent it gently little by little until I got the right angle to sit on the gables and rafters and then smacked on the wood glue and held in place – I’ve no idea if this is the right method, the much easier method would be to glue the roof on permanently but not much use for a skirmish game! 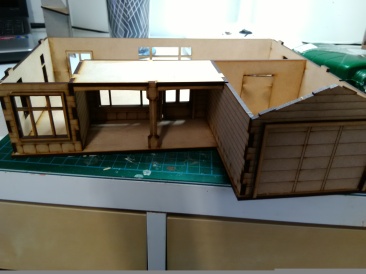 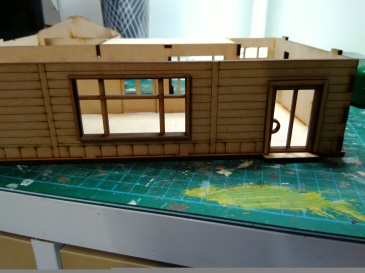 Before doing the garage roof I suddenly realised I hadn’t put on any of the window frames! I had wondered what the empty rectangles of mdf were for? Yes really! Easy job, which one goes where is obvious so wood glue and hey presto! Apart from the porch of course which had the roof and the front pillar set in place so a little bit of swearing seemed appropriate. On reflection it would probably make sense to sub assemble the frames to the walls as the first job prior to fitting the walls to each other and the floor section. This also seemed a good time to glue in the doors (note earlier comment), whether there is any real point to having a separate garage door is mute I think as you can access the garage by taking the roof off. 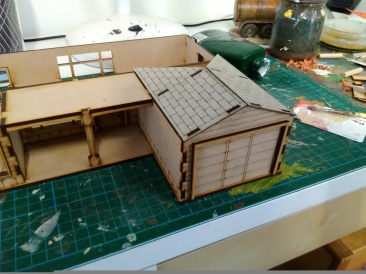 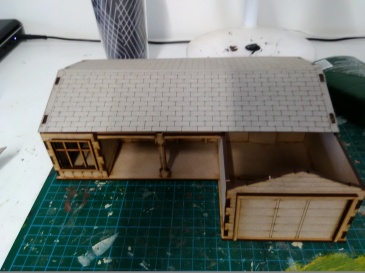 Back to the garage roof; hopefully you can see where I got a little confused. As said earlier the roof is flat grey cardboard with two ‘wings’, the garage gable isn’t separate it’s a one piece section so once again I scored along the centre and bent it to fit the pitch. Looks ok doesn’t it? But what I couldn’t work out was how the hell the two roofs go together, over, under, separate? 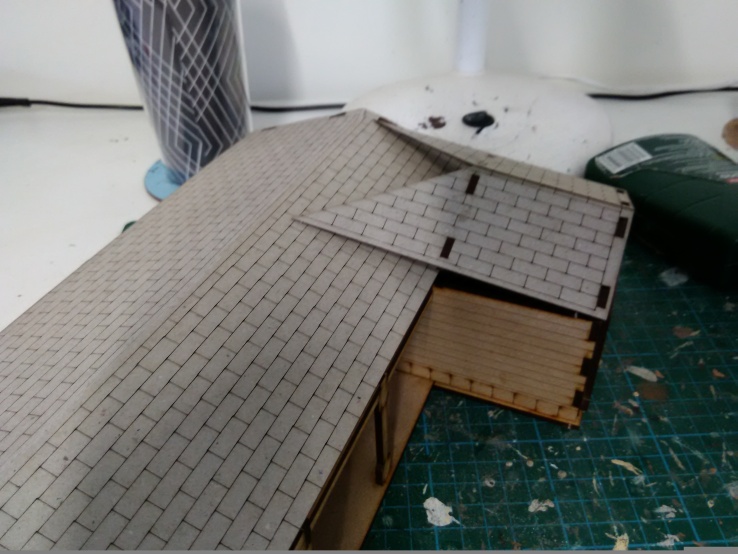 Eventually I worked out the garage sat over the main but this is what I got and panic set in! What I didn’t realise (because there are no bloody instructions!) is that you have got to squash the garage roof down until there is no gap showing and then glue the ‘wings’ to the main roof, all of which makes you think that maybe the original design intent was for the roof to be permanently fixed. Given that the garage roof is reacting against being pushed down I made sure I had plenty of wood glue on the ‘wings’ and then clamped and weighted it in place and let it dry overnight – not something I usually do with these kits. 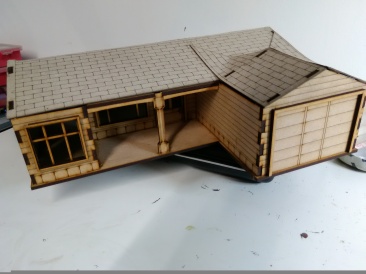 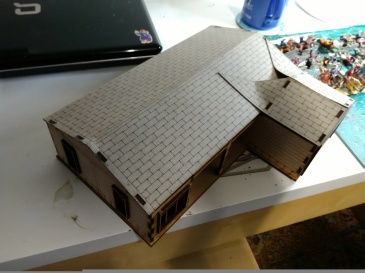 Once dried out it looks good and serves the skirmish need of the roof being removable but I’m not too confident about how much on and off the cardboard will take as the slots wear on the mdf lugs. I also had some spare cardboard left over which I couldn’t work out where they were meant to have gone – too late now! 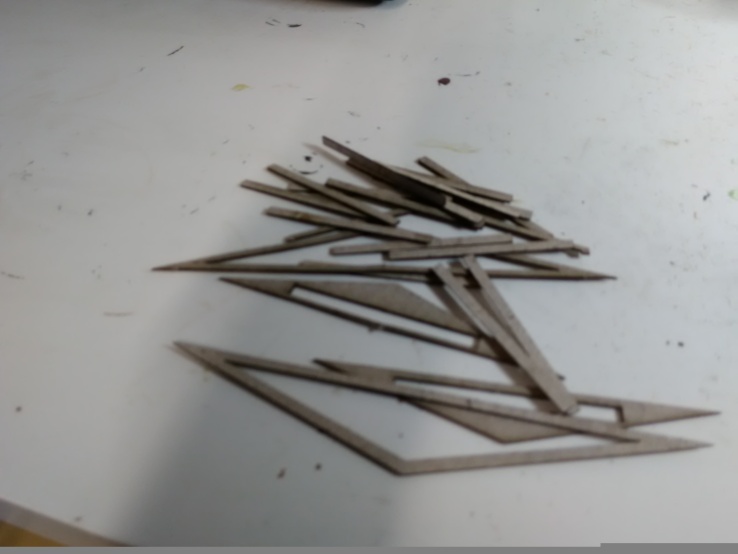 If you know then please let me know, the rest of the group loves to see me have a melt down. 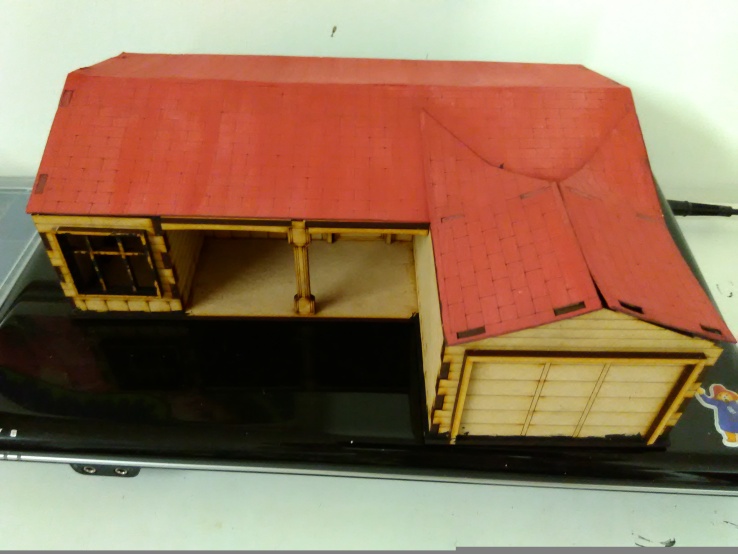 Final stages was the painting, I know some gamers don’t bother but it strikes me as a bit redundant to go to the trouble of building something around which will be nicely painted figures and not actually add a dab of paint – easier than painting figures!

I did the roof red as it seems appropriate for south of the border, looks alright I reckon. The gap at the front I just could not get rid off and it’s bloody annoying but….. 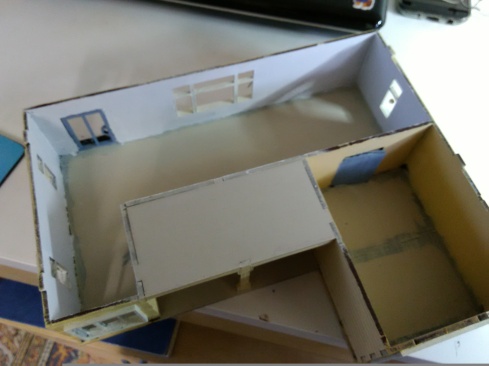 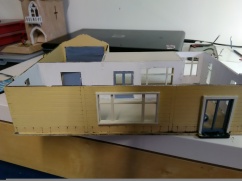 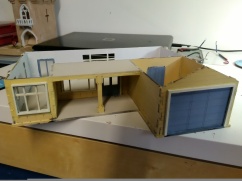 This was swiftly followed by the internal and external walls and of course the window frames and doors. I don’t use hobby paints for this I just go into the utility room where all the match pots from endless decorating projects are kept (“just in case”) and select what I fancy, it works really well and uses up what  would otherwise get thrown away.

End result, see below. As to making the kit, nothing to complain about, the jury is out for me on the cardboard roof but it does get away from having straight pieces of mdf butted together leaving an unsightly gap at the apex and does mean you can go for more complex shapes. I was going to do a comparison between the pro’s and con’s of TTC and Sarissa but this has already gone on a bit so I’m going to do that as a separate blog in a couple of days.

In the meantime enjoy this great hobby of ours. 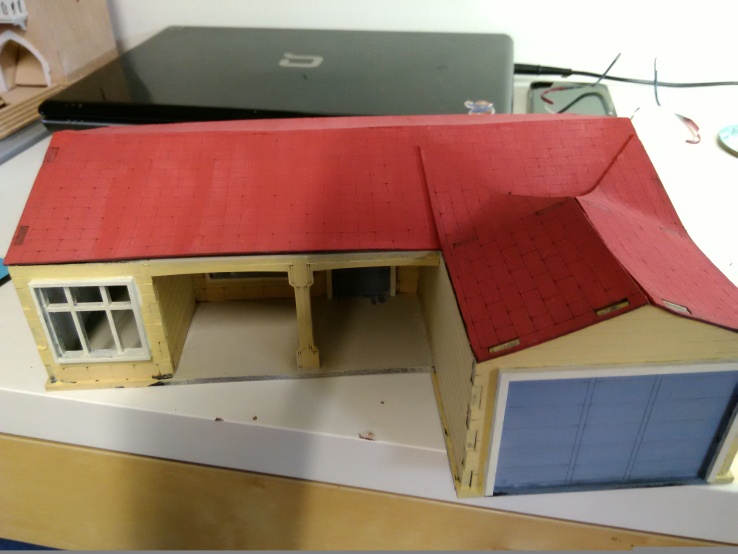