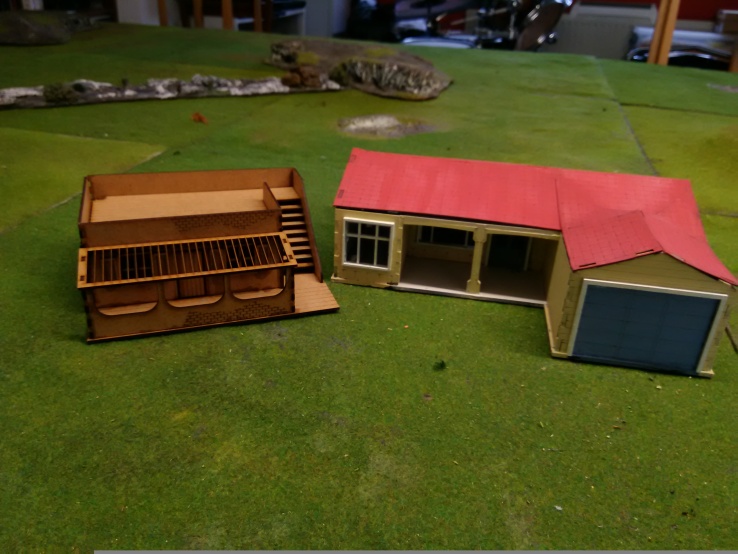 This is the follow on from Part IV where I was going to talk about which buildings to use and in fact did a run through of constructing a TT Combat building. No bad thing in itself and it did mean I now have two clear choices about who to use; Sarissa or TTC.

A quick re-cap for those remotely interested; I want to do a 4′ x 4′ bespoke south of the border drug war town set up which can be used for the obvious DEA/Federal Police raid on a cartel plus other modern day city based scenarios from roughly the 80’s to present day – I think I’m a victim of too much Miami Vice in my youth! The original plan was/is for it to be a permanent set up, so the boards have to be interchangeable in as many ways as possible, mainly due to problems of storage because in a bizarre way I’ve got somewhere to slot four two foot square boards in the games room but not space for more boxes containing around twenty buildings plus the inordinate set up time skirmish games take. This whole debate in fact went around again last night while the Golden Horde were chasing Muscovy boyars around the gaming table, particularly focusing on how we would transport said boards to shows given their size and the fact they couldn’t be stacked easily so there is still a lingering nugget of doubt, if anyone has any suggestions please feel free to respond.. 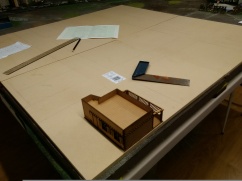 Back to the terrible thing called choice. Both Sarissa and TTC do buildings that can conceivably be used for part of a town in northern mexico (or similar) but neither do anything entirely correct – says the wargamer who has lived in neither Mexico or the southern states!

Sarissa do their Retro Americana range which has shades of Fallout IV about it but the Residential Ranch buildings are magnificent as a cartel boss home and the Motel, Gas Station and Diner would all work nicely; also is the South of the Border range which has adobe’s of various sizes for the backstreets plus the cantina (see main photo) and a bank, the other buildings don’t really work for the set up; there is the CityBlock range which has some apartment buildings that might work at a pinch but in reality they have more of New York/Chicago look; the Retail range has stores in various sizes, basic oblongs ranging from small to large and the Industrial range has some small factory units that might work in a downtown area.

TTC do their City Streets range which further breaks out into Commercial, Industrial, Municipal and Residential plus bundles such as Grey Harbour and Suburbs. The Commercial range has a Motel(s), Drive Thru, Gas Station, Car Park, Garage, 6 different stores and a large Takeaway block all in a very similar style to Sarissa’s retro range. The Industrial range doesn’t have much to offer other than a Distribution Depot which could serve as a drugs warehouse similar to one of the factory units in the Sarissa range. The Municipal listing is big stuff like a Municipal Courthouse, Police Station, Grand Library, Fire Station, all a bit Gotham really and a bit big. The Residential range offers a plethora of potential cartel boss homes with their various Suburban House models a couple of which come with a two storey version, there are also apartments/brownstones similar to the Sarissa city blocks which suffer from the same style drawback. The Grey Harbour and Suburbs are distilled models from the Residential range although a couple of the houses could work.

Both do various ‘twiddly bits’, playground furniture (for the bosses lawn), benches, billboards, bus shelters, street lamps, etc so no problems there.

Okay then plenty of choice, with TTC probably offering more for the particular scenario, so how to choose? I’ve built both and, so far, not much to choose between although the Sarissa are a more sturdy build and you might say better quality. What it really breaks down into is, detail, size and price.

In terms of detail the Sarissa range has it nailed although that can be a bit of a two edged sword and formed part of our debate last night. If we take the cantina as an example (see below) you’re not just getting a square building with a roof and a veranda. 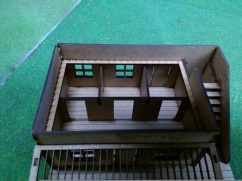 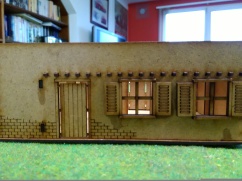 As you can see there is a lot of detailing around the exterior – just look at those shutters, but you also get a divided up interior so that you get a sense of it being a residence – equally you might say this is misplaced in a cantina, not much room for customers! Looking through the listings this is true throughout, the ranch house has seven separate rooms, the smallest retail unit has a back room, the bank has a customer area, a tellers counter, a strong room and a managers office.

Compared to this the TTC range is a lot more spartan. If we take the suburban house I’ve just built, it opens into one big L shaped room with no pretence at kitchen, living area, bedroom.

Not the end of the world, a couple of pieces of thick card or scrap mdf and you can create a three room affair. Looking through their web pages most buildings seem the same, functional wargaming pieces with the detailing left to you and this was our discussion last night, in most skirmish shoot outs a good proportion of the time is spent outside or on roofs and any inside action is the occupying of windows to shoot out or using stairs/ladder to get on the roof (our middle east games of late support this) so is the detailing wasted?

The footprint of the ranges is interesting and if you are trying to fit buildings into a bespoke area like a two foot square board it is important. The Sarissa acreage is big and I’m not interested in who is more to scale I’m interested in practicality. If we take the potential cartel boss house for example the Sarissa measures 390mm x 270mm (15″ x 10.5″ for us old uns) compared to 274mm x 220mm (so 10.5″ x 7″) for TTC. Now I know we blokes always say size isn’t important but that is a whacking difference, particularly across the frontage and becomes even more important if you’re trying to fit into a bespoke landscape. Okay, so let’s forget having a boss residence and look at the more mundane aspects of town streets. The Sarissa small retail unit is 120mm x 230mm and the medium 230mm x 230mm, the TTC mini mart is 165mm x 180mm and the coffee shop 200mm x 160mm; not a lot in it on frontage but again the Sarissa depth is more. If we take the TTC drive thru against the Sarissa diner we get 230mm x 215mm against 290 x 245mm which is not such a big discrepancy but…. I guess all that Sarissa detail has to go somewhere and the acreage is it.

Pricing is a subject dear to all wargamers hearts, we will quite liberally spent £100’s on figures we’ll never paint but anything else? Without beating about the bush Sarissa are more expensive and I’m sure they would say ‘but look at what you’re getting’ and they’d be absolutely right. But when you are going to buy twenty plus buildings that can become important so let’s do a few comparisons again. Starting with the bosses house the Sarissa ranch comes in at £27.50 while the TTC house rolls in at £11.95 and £15.95 for the two storey – that’s an awful lot left over for some interior modifications. Retail prices are £12.50 & £15.00 for Sarissa and between £9.95 & £11.95 for the various TTC stores, only a three or four quid difference but ten buildings becomes forty quid. Sarissa diner £30.00, and the gas station £25.00, TTC drive thru £11.95, gas station £14.95, again a big difference on the bigger items. This actually is the first time I’ve gone into a pricing comparison, and I’m fine if you don’t believe me but it is, and the difference multiplied over twenty plus buildings buys an awful lot of ‘twiddly bits’.

I now have a real dilemma; I really like the Sarissa stuff  and one building is neither here or there but the overall cost is potentially quite high for a ‘vanity project’. What the comparison has also shown me is the reason why I was struggling to fit templates onto the boards in a coherent manner and that is the Sarissa buildings are so damm big that their depth intrudes into where you would hope to put another street or building. Next step is obviously to re-layout the boards using the TTC templates and then a final decision will have to be made but it is looking like TTC. The final, final decision on permanently fixing or not can be delayed a bit further but not for long!

As always we hope you enjoyed the read and please feedback if you feel inclined.