These are a set of desert buildings I was recommended to by Michael at ChargeBlog when I was halfheartedly searching around for buildings to use for our proposed Benghazi games. They are made by Knights of Dice Scenery, who are an Australian company I think, and are retailed here in the UK by Shiny Games. Oh, and before I go any further, no one is paying us for this I just wanted to share with anyone who might be reading.

The range features seven buildings; 3 ‘desert residences’ which are storey and a half buildings with a small courtyard (seen here), so your basic family home, 3 ‘compounds’ which are more substantial two storey buildings with or without a larger courtyard and an outer staircase, the kind of place a faction boss might reside or a CIA operations centre, and finally a ‘storage building’ which is exactly that, straight out of a film set, empty space roofed over with outside stairs. The buildings come as simple basic mdf kits, no frills, no extra’s and that’s the beauty of it because for a reasonable outlay you can bang some buildings on the table in a couple of days and get playing or if you want to customise then they are a blank canvass to work on.

The buildings come in a bag with a picture of what it should be and no further instructions which to me as an amateur model builder was a bit of a worry but once I had popped the pieces out of their mdf frame and laid them out it was fairly obvious what went where. 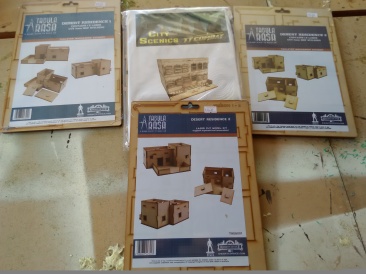 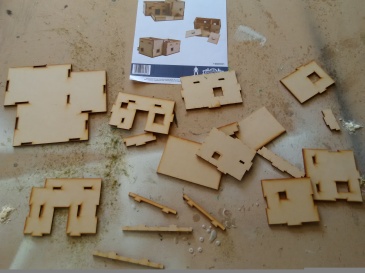 You may note from the picture a TTC Abandoned Appartment Building, that isn’t part of this write up, it was a complete nightmare and I abandoned it – more on this later.

Anyway, I dry built the models first and they went together perfectly, every tab lined up with every slot, no gaps between wall sides and roofs rested in place and came off easily. Note: when building, the trap door to the roofs is part of the building pop outs and shouldn’t be cast aside as scrap (oops!) and when you glue it on make sure you place it so that you can grip to lift the roof off; managed to place one of mine too close to the rim of the wall so it’s a bit awkward to lift.

Next it was a quick disassemble and on with the wood glue for the real thing. I thought I might have to hold the walls together with elastic bands or something until the glue set but the fit was so good it just held itself.

At first I thought they looked a bit small but not so, they are just proper 1/56 scale and when I put some figures on them they look fine. I guess it just shows how over scale some other manufacturers can be which does mean if you want to mix and match you might need to take a bit of care.

Next was an all over paint job in a vaguely sandy looking paint I had in the garage and I guess if you wanted to you could leave it at that.

I wanted it to look a bit more than basic so I took our desert terrain coloured tetrion mix which is the B&Q own brown tetrion coloured with sand dune masonry paint and then added watered down wood glue from another project (the great static grassing of all our terrain boards project, coming soon to a blog near you!) to create a mix thin enough to be roughly daubed on with a standard household paint brush. This was immediately followed with a liberal sprinkling of fine sand and left to dry, which in the recent heat was pretty quickly! 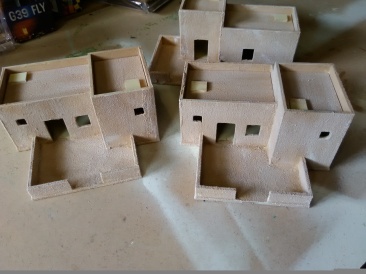 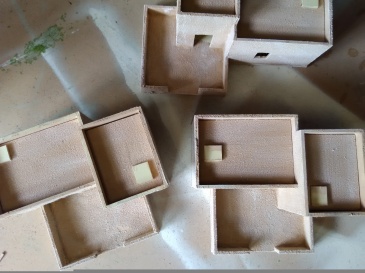 Next up was the dry brushing, I’ve got a match pot of Dulux ‘white cotton’ I use from our last real house decorating project but I guess any old white will do. Once that had dried I applied some static grass in a couple of sun burnt brown hues (mainly get mine now from Serious Play on eBay – a good range, well priced, excellent delivery) and done! Two days and three buildings ready to use.

In closing I’d just like to mention Richard at Shiny Games. As mentioned above the ‘Abandoned Apartment’ from TTC was unbuildable,which was a real shame because I really like their stuff, when I e mailed Richard with photo’s he responded immediately with a fulsome apology and refund (I took crtedit as I want to buy some more Tabula Rasa) as well as removing the item from the site. Prior to and since he has been very helpful in responding to queries and I recommend them to those seeking buildings in a variety of scenarios, the range is excellent. 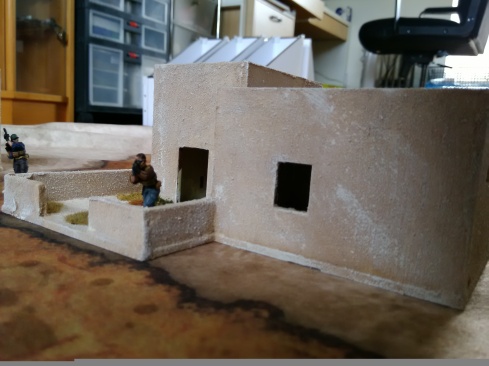 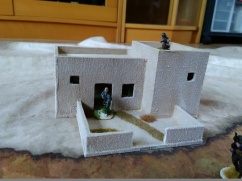 I enjoyed making these so much I’m going to get the rest of the range and then we’ll be very much on the way with the Benghazi project so watch this space.