We left this project with figures and vehicles to paint and rules to try, which at the time sounded pretty easy…………..

Actually painting the figures wasn’t that bad as we didn’t paint them! I’m a unit painter really so any mistakes get lost in the mass of the unit and a good job on the basing can detract from a myriad of sins, Dave is a really good painter but very much an historical man so he passed this time (but in fact did get involved a bit later), so it was over to our good friend Gareth at ADC Painting for some more of his first rate work. Before we sent off the figures some research was required, even though you would think that for something so current nothing would be needed wouldn’t you? The main research was for the Mexican Federal Police and this is where Google Images came up trumps (no reference to current US leadership intended) because if you type in that title you get loads of really useful pictures of not only the officers and troopers but also their vehicles. Essentially the uniform is a royal blue with black for the body armour and weapons, we didn’t try to get too clever with insignia or lettering, at 28mm it’s just too fiddly even if you’re not doing it yourself. 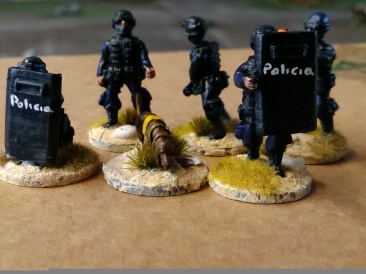 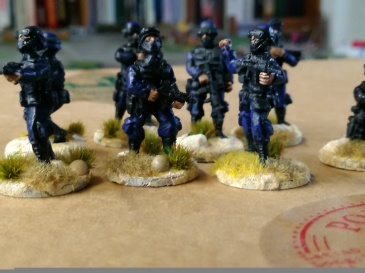 Google also came to the rescue with the drug gangs as a similar search will bring you many a photo of hard cases to do battle with, complete with  tattoos which Gareth obligingly applied to the models. One figure in particular has become a bit of an in joke as he is the guy in the white suit who Gareth insists on referring to as “the man from Del Monte” which now means we can’t take him seriously as a dangerous drug lord! 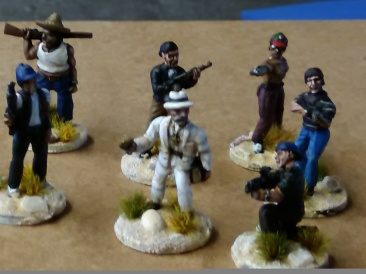 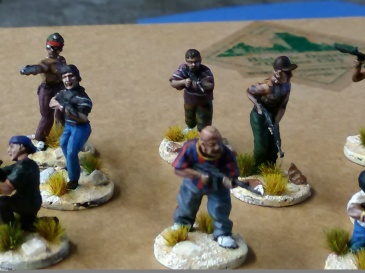 The undercover government agents went through a bit of a metamorphosis while they were with Gareth; originally they were destined to just be DEA agents and maybe that would be overt (they would have’DEA’ painted on their armour) or maybe covert, but then Dave watched the Michael Bay Benghazi film and got all enthusiastic about doing it as a demo (or maybe participation) game sometime. I’m sort of convinced it might make a show game (need to more actual research first) but that’s for the future, what it did mean was that we would have the undercover guys as anonymous contractors and so use them as we saw fit in whatever ‘modern’ scenario we came up with – I can see this taking on a life of its own and we’ll be knee deep in every dirty war of the last 20 odd years! 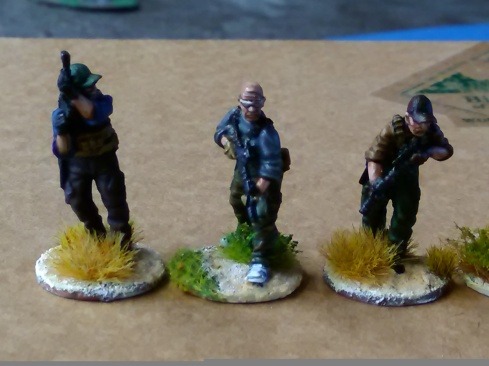 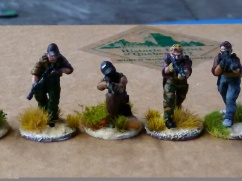 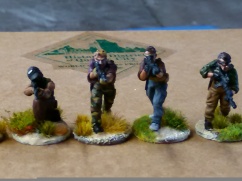 So that was the figures done and based up in our new desert terrain effect. One thing we did have to do, and this is a big sorry to Gareth, was lighten the blue of the police, mainly because the royal blue and the black looked more or less the same at any kind of distance which created the effect of making them pretty non descript’. A triumph of wargames necessity over historical accuracy! 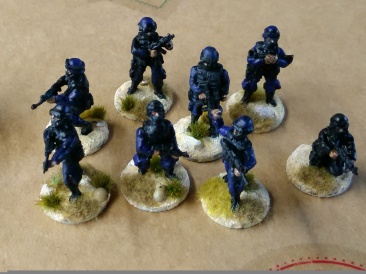 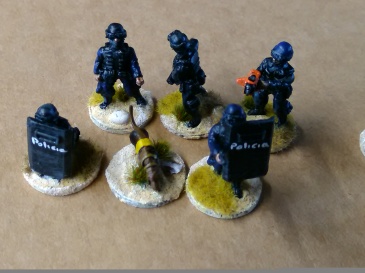 Next up was the vehicles. The easiest job was the contractors SUV’s and I mean easy. One of the group has banged on for years now about scanning the shelves of Poundworld for ‘useful stuff’ and most of us have humoured him in a slightly superior way especially when some of the ‘gems’ he has come up with look just like what they are, tat from Poundworld. However on a trip for something completely different I caught sight of some die cast metal cars, slightly over scale but not much in it, meant for some kind of ‘hot wheels’ type thing, so I got one. 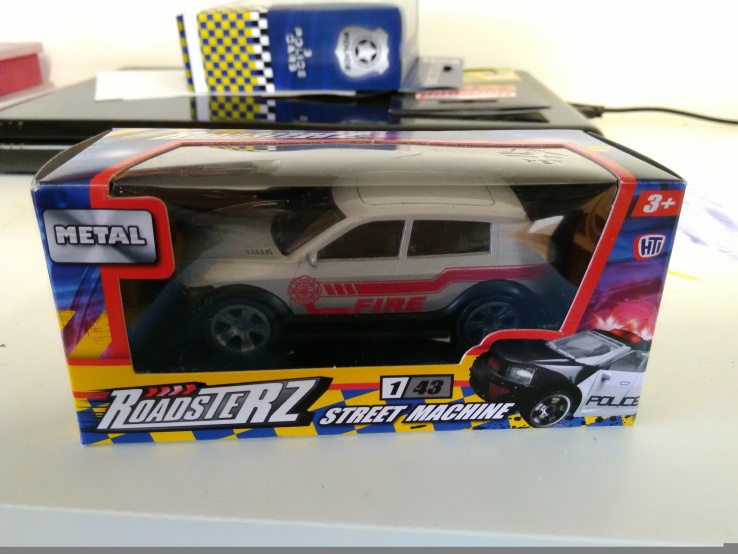 And you know what? He was right! All I did was paint over the decal, stick it on a piece of card, trowel on our desert wood filler mix, dry brush & add grass and then dry brush the vehicle in the desert mix and hey presto one contractor SUV fit for any conflict. 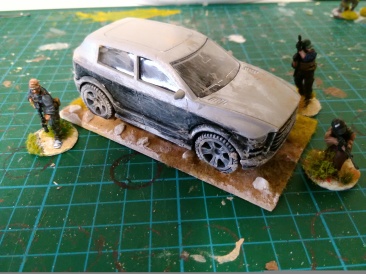 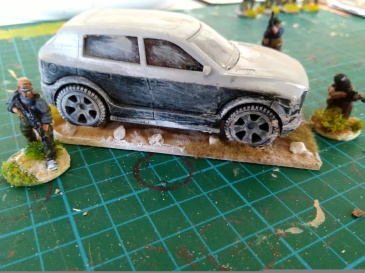 In fact I liked the finished product so much I did another one, and remember only £1 each compared to say £10 for a resin cast? 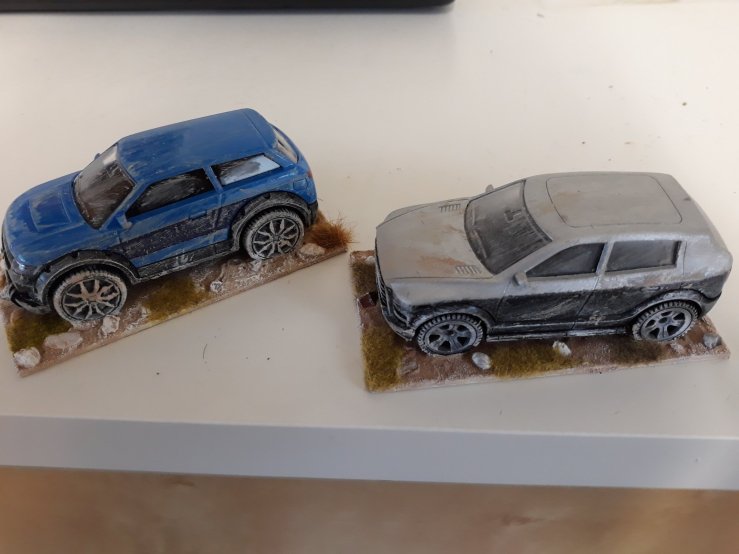 Fresh from this success I went proper Poundworld shopping for transport for the federal police, bearing in mind that the vehicles are really there to provide cover and interest for the game, they don’t have to be seen to be driven. Amazingly I found a pack of plastic toy police cars (three in a pack for £1) which were a dead ringer for the vehicles shown on Google plus a helicopter! 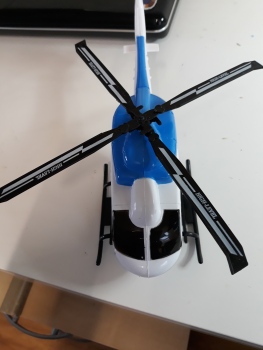 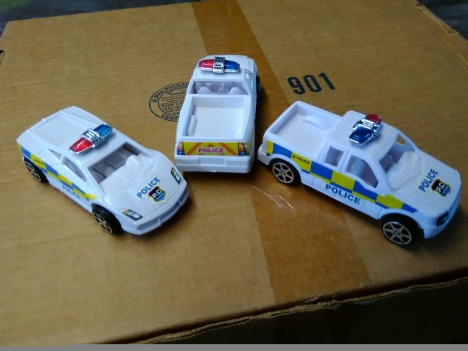 They are a bit more over scale and did need a bit more work but in the end it was worth it. First it was hot soapy water to get the decals off (and they just did not want to come off!), then a spray of black under coat (but first masking off the roof lights), a coat of paint to re-do the interior trim where it got sprayed black (mask the windows next time) then the first coat on the royal blue and after that a second coat as the white does tend to bleed through. 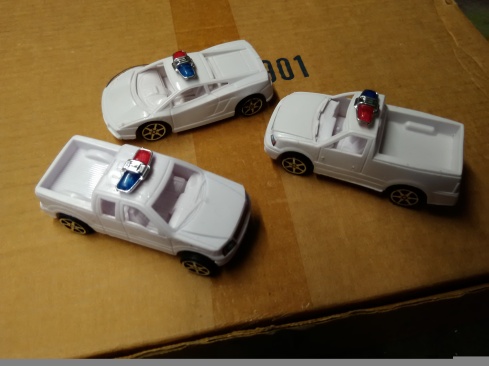 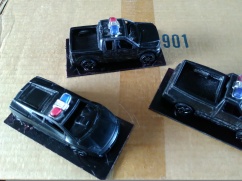 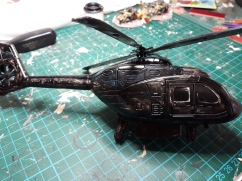 Then onto the cardboard and basing up, except the helicopter which currently just sits waiting for me to come up with a stand to enable it to fly over the game and I think I’m making hard work of what should quite a simple task. 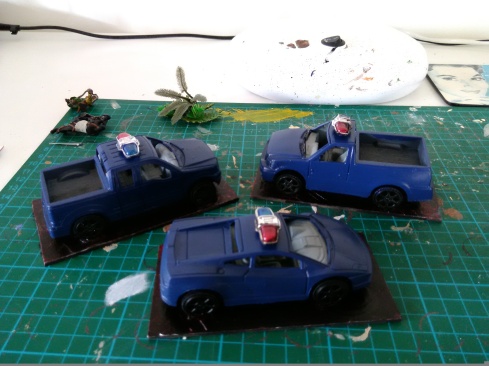 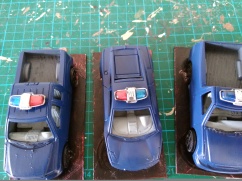 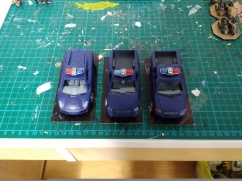 Once the cars were painted though it did strike me that although they did meet the criteria of being able to be placed in the game to provide colour and cover they did look a bit plain and a bit generic. 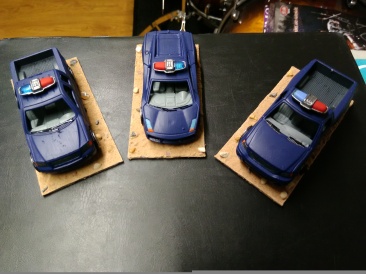 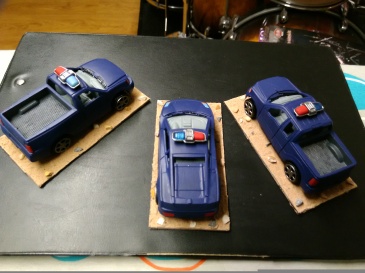 So how could I make them look ‘mexican’. Good old Google most certainly gave all the detail on the livery and numbers and lettering on cars, trucks, SUV’s for the Federal Police and even sport cars but painting on to plastic models? Nah! There must be something out there I thought so a lot of googling later I came across, quite by accident, Company B in the USA who I think used to be a UK based firm. Amongst their figure range and very extensive resin vehicle range – do take a look, there is a decal range, mainly for WWII but it includes a custom decal range. Thinking it would be a bit of a long shot I e mailed them and to my pleasant surprise got a very positive response from Bruce at the company along the lines of anything is possible. A long train of e mails back and forth on size, which images, how many, etc resulted in Bruce sending over a sheet of decals which have transformed the vehicles from just any old police vehicles to most definitely ‘mexican police vehicles’. I also learnt a few key lessons about the best way of applying decals (mainly after the event) so the next lot we do should be even better. 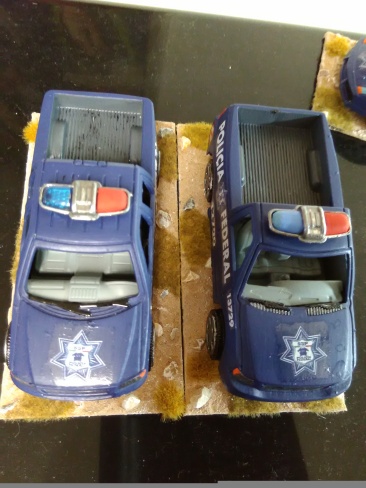 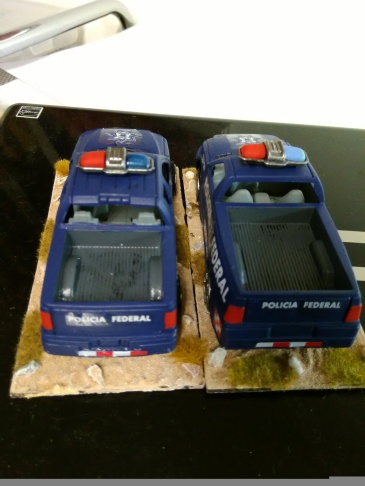 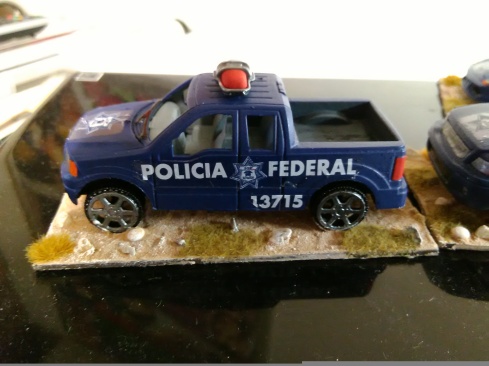 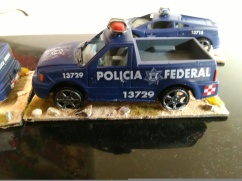 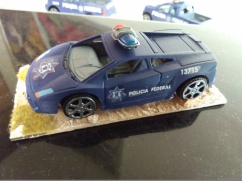 OK, so the decals cost a bit of money ($32 including shipping) but the vehicles were cheap as chips, I managed to use some of them for the helicopter and we’ve still got decals left over if (ha! when is more likely) we do some more vehicles.

Funny isn’t it how as wargamers we’ll moan about the price of things (and I am certainly guilty of this) but when it’s something we really want suddenly money isn’t a problem – I realise of course that for many, spending money on toy soldiers is a complete frippery.

So that’s the vehicles and figures done, at least for now, as all wargamers know all projects seem to grow well beyond their original parameters!

Was going to go on and talk rules in this blog but I reckon I’ve waffled on enough so that’s it for now, look out for a rules discussion in the next one and then the summer project of actually doing the buildings, we hope!