For years (many, many years!) our Dark Age skirmishing has been done using an old 1980’s set from our Scimitar Wargames Group days  ‘Oshere’s Helm’ and completely adequate they have been given that we would only skirmish every now and then. These days we skirmish more and more (probably reflecting our advancing years!) and as we’ve collected not only more figures but also more ‘stuff’ the thought of writing a new set has become a reality and so I thought it might be nice to share the initial process. Why? Well, probably the delusion that someone thinking about giving rule writing a go might get a bit of inspiration and also anyone reading might think about chipping in an idea or two. Who knows!

All rule sets, skirmish or otherwise, have some basic tenants which become the ‘chapters’ of the set. These are; the title – got to be catchy, a sequence of play, movement, shooting, hand to hand,  morale of some kind, oh and choosing the protagonists. I’ll use each of these to sketch out my thoughts and ideas and why I’ve chosen a particular path (which is sometimes “it seemed like a good idea at the time”

At the moment our working title is ‘The Jarls Saga’, tells us it’s going to have vikings (always a good thing for dark age skirmish) and implies a continuing adventure might be possible (D&D without the monsters, although Beowulf…..).

Play sequence. We’ve used alternate, simultaneous, random, and all have been successful but a skirmish has always struck me as one where an aggressive bastard kicks something off and everyone else responds. My current idea is to role for initiative (who goes first, or who chooses who goes first, and they are different!) based on a straight winner take all die score modified by some kind of scenario factor (so, ‘raiders add one to score’ type thing) or leadership factor (‘clever leader adds or subtracts one at players discretion’). We could draw cards for each war-band in the game like we do for our WWII skirmish and which works really well – this kind of drives us into a multi war-band game (no bad thing) but what if we just want a one on one raiders v traders game? Maybe the method of choosing protagonists will lead this somewhere? Novice rule writers will now be thinking ‘this is a bit like hard work, I’ll go buy someone else’s rules’ experienced writers will be saying ‘been there done that!’

With initiative decided it struck me that some kind of group morale (already this is a group game, not a single warrior game) should be done based on what happened last turn so that players great plans might come to nothing. I was thinking that for a group only two things matter, some one died or a ‘great one’ went down (not necessarily dead) or maybe a third for allies buggering off but even as I type I’m not sure on this.

Next up, shooting. Let’s face it not much of this in the period so let’s get it out of the way for everyone and get on with the serious stuff. So everyone shoots simultaneously, damage is recorded and the game moves on.

Movement. The player with the initiative moves and at some point this will lead to contact with an enemy. I don’t see a need for morale to get stuck in, that is after all the point of the game.

Fighting, aka hand to hand combat. The stuff of the saga’s and many a Hollywood (and now cable TV) epic, the reason for doing the game in the first place. Needs to be swift and savage and I’m thinking some kind of individual morale test for the guy who doesn’t do so well.

Shooting again. Why not? If we cast this right it will be pretty ineffective but maybe someone can get lucky? Multiple war-bands? Does only one fire (the next in sequence)? Or does the amount of shooting phases reflect the number of bands on the table?

The other guy’s war-band (or other guys war-bands) get to move and then they get to fight. With multiple war-bands this  might end up with the potential for confusion or maybe I’m thinking too far ahead.

Choosing the protagonists. The last thing on the list but the first thing for the ‘balanced’ game to be viable. Experience has shown however that getting the basic rules to work first takes priority and the how we get the figures on to the table will be, to some extent, determined by the nature of the developed game. Code for I don’t know yet and I want play with some figures!

OK, sequence done (for now) what about the detail?

Movement. This only needs to be fairly basic. Some standard rates for walking and running with reductions for being armoured, wounded, crossing terrain and carrying stuff – treasure, livestock, prisoners. I’ve been thinking mounted troops for Europe so a galloping rate. Also the livestock need to move (it is a dark age skirmish so nicking the other guy’s livestock should be a cornerstone of many a game) and probably randomly – cue six sided ‘arrow die’. The actual distances almost don’t matter provided they fit within your playing boundaries. My guiding light is that running is about a third more than normal walking and galloping about double but both are limited to the number of times they can be done and/or they carry penalties – exhaustion, disorder etc. Running away and being chased can be simply the running rate or my preference of the normal walk randomised up or down by a die roll to add an element of uncertainty.

Shooting. The weapons are easy; bows, crossbows, slings, staff slings, etc. No differentiation on types of bow and no ammo rules except javelins being how many the figure is shown with. In fact what the figure is shown with is the ‘golden rule’ for all our skirmish games, if he’s not carrying it or wearing it then he hasn’t got it. My thoughts here are to have a ‘shooting factor’ either standardised or personalised to what the figure is carrying. First makes the maths easy the second requires more work but does make it more individual. The current idea is that the factor is the amount of damage inflicted (one is a light wound, two is serious, standard stuff) and then have conditions factors that are all negative to drag the damage down; so minuses for range, movement, armour, helmet, shield protection. This way the chance of actually being hurt by missile fire in what is essentially a melee game is minimal so players who like to sneak around wont be very successful and those who like to turn up with loads of archers will get cut up. The only fly in this ointment is scenarios with mounted archers like Byzantines and Huns but maybe I’m thinking too far ahead given that we haven’t got any of these in skirmish guise yet. 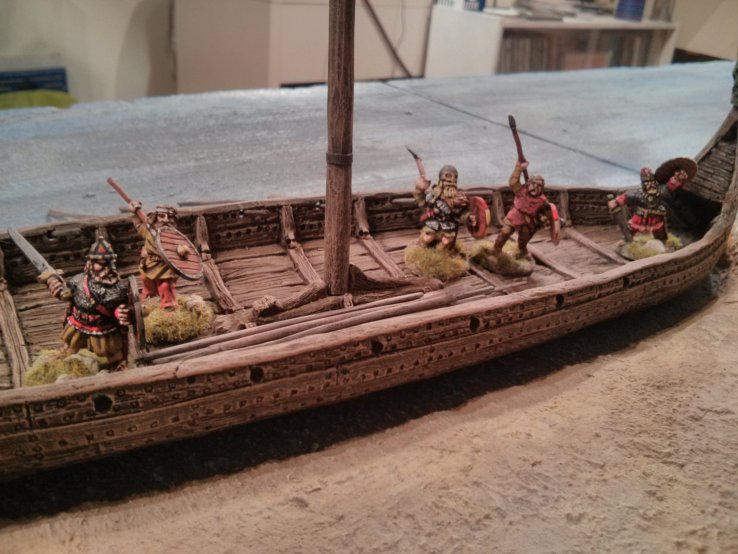 Hand to Hand. The whole point of doing this in the first place! This should be more involved than the shooting so I’m thinking of having a hand to hand ability for each figure when using their primary weapon, which would of course mean complexity at the ‘choosing protagonists’ end, and then a standardised ability across all combatants for a secondary weapon or somebody else’s they’ve picked up. The initiator would take first swing and the damage would be the difference between the two abilities modified by factors for the type of weapon; any wounds, whether the opponent parries and some kind of random.Negative damage would initiate a personal morale check “oh shit I didn’t even bruise him!” The positive damage wouldn’t immediately go to the figure (like shooting) but would weaken shields until they shatter and then reduce the effectiveness of armour, only after that would actual bodily harm take place. A big difference in the numbers might lead to the loser being knocked down and losing their weapon. The opponent would get his swing in his phase of the turn and if they are both still slugging away after that then the fighting is simultaneous. 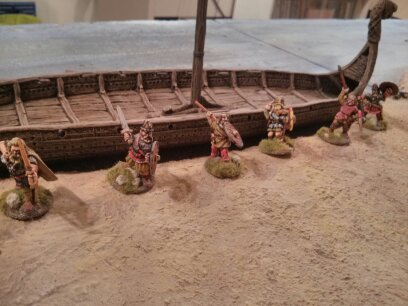 Morale. From the sequence we can see we’ve got two lots, one for the group after initiative and one for an individual who’s had bad stuff happen to him. In the case of post initiative my first thought was a % die role and then taking off 10% for each reason to test (so 3 dead guys is -30%) and then having a list of increasingly ‘bad things’happen as the score gets smaller. Alternatively the band could have some artificially constructed ‘courage’ rating which has to be rolled under/over to carry on. The first is easy if a little ‘old school’ the second would need more work at the ‘choosing protagonists’ end – I feel complexity raising its ugly head! For the individual I was thinking a morale threshold to role under/over based on the status of the figure; veteran, novice – again a bit old school modified by personal factors and how far they fail dictates what they do; drop weapon, rooted to the spot, slink away etc. pretty do able I think. 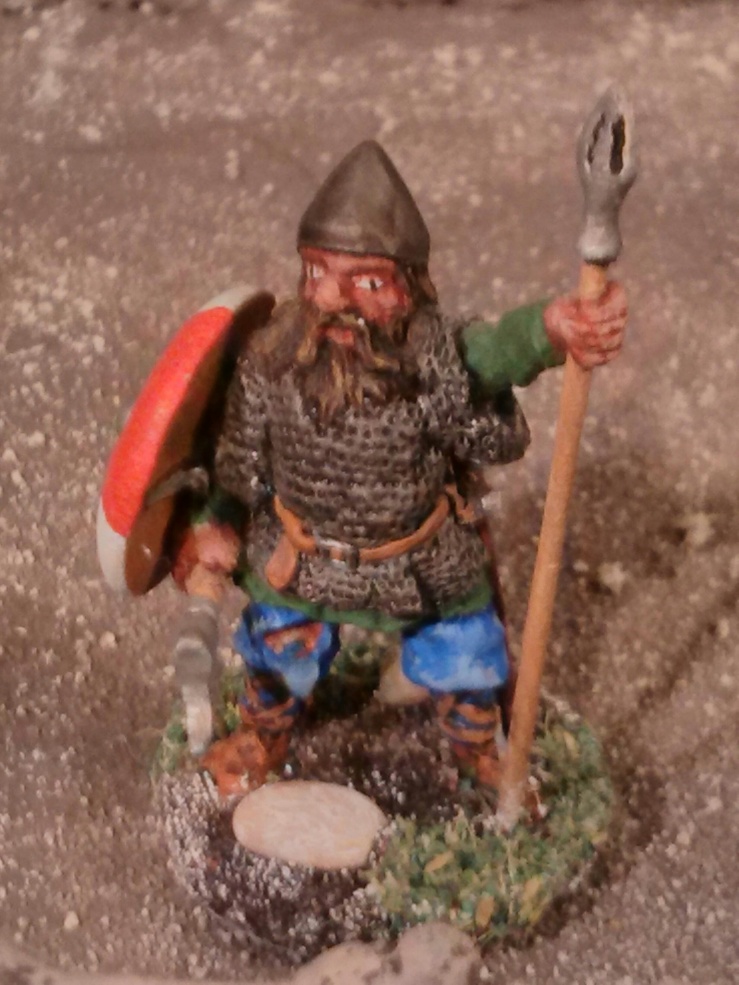 So there we are, thoughts on a set of rules, which means I’ve now run out of excuses not to write them. Once the first draft is done maybe I’ll put up a copy for people to have a go with. As always, positive responses always welcome either on line via Twitter or at the shows.