Usually when we kick off a new period to play, the scale is the least of our problems, we’re 28mm gamers so we choose from the 28mm ranges available, and so it was with our proposed move into the Mexican Revolution. Or so we thought!

One of us (Ian) has had a long standing desire to game the revolution, mainly fuelled by left wing romanticism, tequila and watching ‘The Wild Bunch’ too many times; and that is pretty much where it stayed until a chance purchase of Herbert Molloy Mason Junior’s ‘The Great Pursuit’ re-ignited the passion. The difference now was that we could include US cavalry, buffalo soldiers, automobiles and planes! This, according to Dave, made it a bit more interesting than one bunch of Mexicans chasing around after another bunch of Mexicans, although when I pointed out that our Carlist Wars was just one bunch of Spanish chasing after another …….

Anyway. In the time honoured fashion we set about buying samples from the few manufacturers that do the period (Old Glory, Outpost, Tiger, Gringo 40’s,) and soon amassed a tidy little lead mountain.

However (and there’s always a ‘however’) what we ended up with didn’t completely light our fire. From a completeness point of view the Old Glory range ace’s it and we’ve used plenty of their figures in the past to be comfortable with their offerings, from an aesthetic point of view it’s got to be Gringo 40’s but the range is a bit limited and the figures don’t mix too well with the others, Outpost is a bit of an unsung range with some nice Federales but with some very variable sculpting on others like the US cavalry, and Tiger offers just some ubiquitous Mexican bandits on foot. So come the final quarter of 2016 we were willing ourselves into a decision based around Outpost/Old Glory and I had got the bare bones of some rules ideas down based around using a mix of rectangular and hexagonal bases from Warbases. 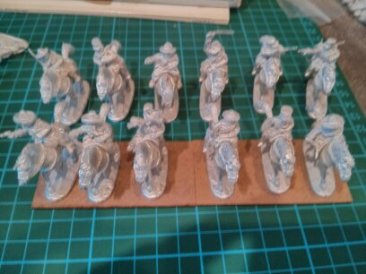 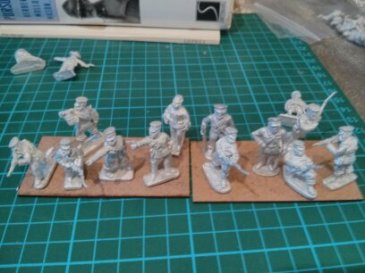 The came Reading in October and during the aimless wander around the stalls my attention was grabbed by the Shell Hole Scenics/Early War Miniatures stand and what seemed to be the answer to our dilemma. Between them they do, US cavalry & infantry, buffalo soldiers, every version of lmg (and there were a few), motorbike riders, Villaista foot and horse, Zapata foot & horse, Federales foot, horse & artillery, Indians and Rurales. Only one problem, 20mm!!!!

No samples were bought (unusually!) as we needed to have a bit of chat about what could be a bit of a departure for us and Dave wasn’t (isn’t)  too keen on painting anything smaller than 25mm – it doesn’t matter if I paint them, my starting point is pretty average. The temptation of being able to do the period properly however got the better of us and so more samples were sent for and a second (smaller) lead mountain was created.

The most obvious difference between the two is that Shell Hole has the larger range and Early War has a number of their range as multi part which is lovely but it aint alf fiddly! None the less the figures look nice together and in fact work better on the base sizes we had looked at for the 28mm. 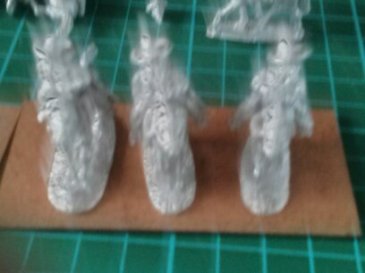 The concern however is terrain. No south of the border game can be complete without trains (and track), adobe buildings, US border buildings, trees, cactus etc. We have plenty of 28mm terrain but we don’t want to go overboard just for one period (don’t mention the 10mm Franco Prussian adventure!). Model railway (HO/OO we think?) might be the answer for the train dilemma but my memory is that this stuff is expensive. There are a few buildings around but not enough we think for the outskirts of towns and we can’t think of models for churches, barracks & forts. Maybe those nice people at Sarissa?

Really we’ve made the decision, its 20mm, so time to get writing the rules and sorting out unit sizes so we can buy all the figures we want in one go (gales of hysterical laughter – no project EVER goes like this!) and deal with the terrain issues later. The aim is to have a demo ready for 2018 so we need to get our act together. If anyone reading this has any suggestions on the terrain problem tweet us or e mail us, we’d love to know what you think.

Oh and that 28mm metal? South of the border skirmish anyone?