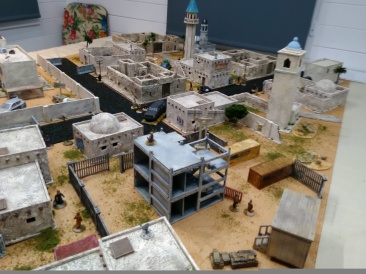 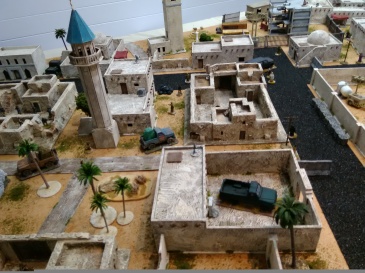 Another chapter in our ‘Syrian Adventures’ but this time an away game in Bob’s shed (see wonderful terrain) with associates from the Warwickshire area and me umpiring six new players to the Spectre Operations rules which turned out to be quite the task!

I’d written a scenario sheet which included the narrative for each side plus the basics of the rules so people didn’t need to keep asking the same questions plus stat cards for each side that had all the skill set information they needed for their fire teams. This was a lot of work before hand and I’m not certain it was worth it as I still came away knackered!

The basic scenario was that a Kuwaiti envoy to the Ahrar al Sham brigade had fled the group with evidence of alleged atrocities and is hiding out in the town of Maskana. By surreptitious means a message has reached the French mission in the town and a deniable group of US and British contractors have been assembled to secure him and bring him back to the compound for safe onward passage. The game was conceived with three teams of contractors (Pro’s, four per team) starting in the compound with two armoured civilian vehicles and a known location for the asset; to oppose them four units of insurgents (Militia, eight per unit) – reduced to three on the day due to illness, were placed around the board with no knowledge of where the envoy was so they had to do a house to house search and/or hope that street urchins controlled by the umpire would let them know if the envoy had been seen or heavily armed westerners started deploying who just might be on a rescue mission! 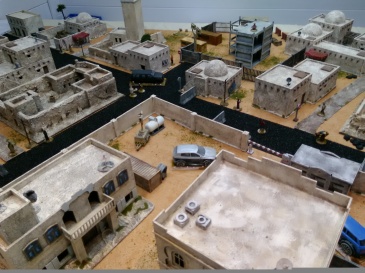 For point of reference the left hand above photo shows the square tower with blue roof where the envoy was hiding and down the road from it on either side at the edge of the board were two walled off areas where two of the insurgents started the game. The contractor’s compound is the foreground walled buildings in the right hand photo and across the table from it again on the board edge was another walled off area containing the third insurgent unit. My vision for the game was, two teams of contractors would barrel out of the compound, get to the envoy and by then the insurgents would be far enough on table to see what was happening and a running street battle would take place. So much for vision!

The contractors did indeed opt for the two vehicle rescue so Bravo team manned the gate and Alpha and Charlie loaded into the cars and moved toward the gate. Unfortunately the Talata insurgent group from the area opposite also decided to go balls out so they had spilled into the street and as soon as they saw potential targets just opened up! There was a bit of a debate about ‘would they know the cars were contractors’ but the consensus was that nobody else would be barrelling around so the firing stood. The nett effect of this was that the RPG took out the lead car killing the driver and effectively scuppering that plan for as long as the RPG guy was in the fight. A brief ‘comedy moment’ saw the back blast from the RPG take out an unlucky civilian (or martyr) and the rest of the civilians took for cover – waste of time painting those! 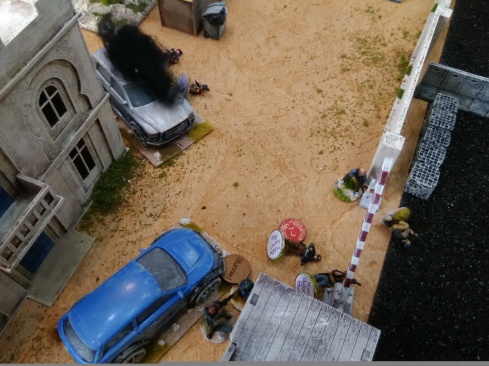 The ensuing gunfight caught the contractors on the back foot and in relatively few moves half of two teams were KIA and the contractors were in defence mode not rescue mode. From a rules perspective this was a surprise as in all our previous games the contractor better stats have generally prevailed, I can only put it down to some pretty bad initiative rolls in the first few turns and some very good shooting rolls from the insurgents, I could of course have cocked up but I don’t think so. On the other side of town the other two insurgent groups took advantage of the option to split their groups in two and diligently searched the buildings hoping to turn up the envoy speedily.

The contractors finally caught a break when the remaining two from Bravo team managed to sprint across and down the road making for the envoy’s hiding place leaving behind Charlie team completely eliminated and Alpha literally holding the fort. In true wargamer fashion of course the Talata player thought this was a reason for him to start following on a parallel course despite being in the middle of a gunfight – old problem of the player seeing far more than the figures on the ground, after a spirited debate they stayed for the gunfight. Good thing too because now Alpha had got the hang of it and superior weapons skill started to make a difference exacting a kind of revenge.

Down at the other end of the table however the methodical house search finally yielded a result and the envoy was discovered in the tower After a brief fist fight the envoy was subdued and was trussed up ready to be carried out of the tower for a trial and ultimately sentence. It was about then that Bravo sprinted into sight of one of the fire teams and paid the price, both going down in a hail of fire. The game was well and truly over.

Was the game a success? Well it went nothing like I thought it would be but the players came away talking about getting a set of the rules and some figures so a success in that sense. From a scenario point of view it was a mistake to put one of the insurgent groups so close to the compound but as one of the players said “we should have put a team on the roofs to sweep the streets before the vehicles exited”. Also spreading out the game area did result in two of the insurgent teams barely firing a shot and in a wargame that’s not any good, what I probably should have done was have one of the teams with the envoy, but on foot, and then have to fire and move their way back to the compound where the other two have to make a decision about whether to send back up or stay on the defence.

Anyway, lessons learnt. Thanks to Bob for setting up the terrain and providing the catering and thanks to him plus Dave, Pete, John, James and Dave for taking part.