Genuinely that’s what I said when I mentioned I was going down to Colours and I actually think I meant it! I have only been going to the Newbury show at the racecourse for the last couple of years, in the past, shifts and family commitments have meant it just wasn’t possible but after a thoroughly enjoyable 2018 I decided to give it another go.

As usual it was spread very neatly over 3 floors, exclusively trade on the ground floor then some trade and games on the 1st floor and all games on the 2nd; works out very well and congratulations to the organisers.

First stop was Blotz to pick up some pre ordered stuff for one of the guys, simple in and out. ‘Oh while I’m here I’ll have a bit of a browse…..’ Walked away with some US style postal boxes for the Sicario game and different size generators for the parked sci fi game. Oh well only a few quid.

Next was Colonel Bills for some more stuff for another one of the guys from the Depot sets. ‘Oh these look nice, never really noticed before, I wonder if they do civilians? Oh they do, refugees? that’ll be ok for the Sicario games, oh they also do a TV crew, could use that for our Syrian games, should stop people being over enthusiastic with their firing!’ Another few quid, hopefully I can get Dave to paint these.

Right, wander round and then have a look at the games. ‘Oh, it’s those Urban Construct people, I’ll just have a browse’. This was a complete disaster for the “I don’t need much from Newbury” plan. I guess the Urban Construct offerings are an acquired taste, it’s all old school resin cast in a very robust style, no fancy detailing, no opening doors, lift off roofs and the suchlike; a good deal of it is post apocalyptic but a lot of the debris, bunkers, barricades, wrecked vehicles etc can be used in modern settings, I have to say I’m quite fond of it and it does come in at a reasonable price. My first error was noticing the bargain box, a selection of miscasts ranging from 50p to a couple of quid which the lady proprietor informed me either did nothing or sold like hot cakes – guess who was in the mood for hot cakes?

The 3 vehicles were a Land Rover essentially missing it’s tyres and pitted, ideal for a shot up vehicle in the middle east, their technical (which I’ve got in use already) with the sides missing again good for destroyed in the middle east and a Lada (I think) which basically had the whole bottom half missing, sunken car in a pond I thought. The steps I though of using against any of the many middle eastern buildings we already have to ring the changes or maybe keeping by and adding some wrecked walls to and making a ruin. The bag was miscast sandbags etc which I thought of using for knocked out positions, Dave thought a bit of filler and good as new, we’ll see. Missing from the photo (you can see it in the main photo) is an industrial sized gas/fuel container with the pipe runs broken through which I was thinking could form the basis of a game where a sabotaged oil run off has to be repaired by engineers protected by contractors.

Then came the friendly chat with the proprietors and slowly working through the display items thinking ‘I can use that for….etc’ In the end I had to stop at a round number (pounds not items!) even though the post apocalyptic bunker could be used for French Indo China – the French were big into bunkers, the wrecked car barricades could be used for almost anywhere, the…… You get the picture. 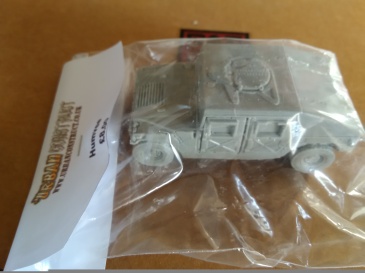 What I did get was another Humvee to go with the one I’ve already got – now we can do an ambush of a column in Afghanistan or Iraq. Yes it’s not pretty or super detailed but at £8 it’s well worth having and one has to ask the question what do we really do with the vehicles in a game? They arrive, guys get out, they get blown up or drive away, do we look at them in any great detail? probably not we’re too busy examining the beautifully detail figure sculpts and the paint job on them. The other 3 vehicles were all for the Sicario project, a transit style van, an old style police car and a VW all of which can occupy the streets of our ongoing layout and provide cover for the combatants.

That was going to be it (hadn’t reached a round number yet!) when I noticed a couple of other items.

The signage I thought ideal for the Sicario buildings which are underway at present and the ladder great for an industrial tower – converted Pringle tube? one for Pete I think.

Having dragged myself away I went and looked at the games, I didn’t take any photo’s for reasons I can’t really explain but the ones that stuck in the memory were; a Rapid Fire game, a game based around the TV series ‘Space 1999’ (oh the memories!) which had tremendous terrain, a tank game in the Ardense with very realistic looking snow and a very big 28mm Roman invasion of Britain game – quite the spectacle.

Now that should have been it but then I came across Commission Figurines  a smaller trader (and very friendly) who does armies in mdf and an array of mdf markers (bought a pack to use as suppression markers for Spectre), templates and a selection of trays to make up for Really Useful Boxes; now I know this isn’t big news particularly but it was the first time I had been able to see the idea in action and talk to someone about the various options. We’ve got a lot of 9l & 4l boxes with terrain items in and in some cases they are a bit of a jumble so I took a punt on a couple of the large trays for a 9l box and it worked.

All the Sicario vehicles in one box (note the space for more!) easy to take to a show, easy to stack. Result.

Then it was time to go, so off to the exit. ‘Oh, Eagle Figures, I need some battalion guns……..’