Back from Newark with almost nothing bought – in fact just some trees from Last Valley – but came away with a real ‘feel good’ glow. Why?

The weather obviously helped but there again we were all stuck inside browsing the trade, eyeballing the games or in our case running our own game. 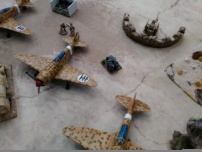 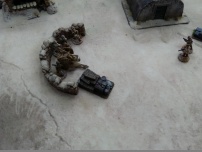 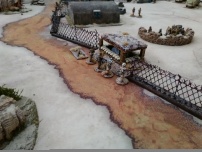 We’d decided to do a LRDG version of our standard WWII rules for no other reason than Dave had painted the figures and Pete had done some very nice scratch built ruins and of course we had our Cigar Box desert cloth; so with a bit of research to give us a background context we were ready to go. 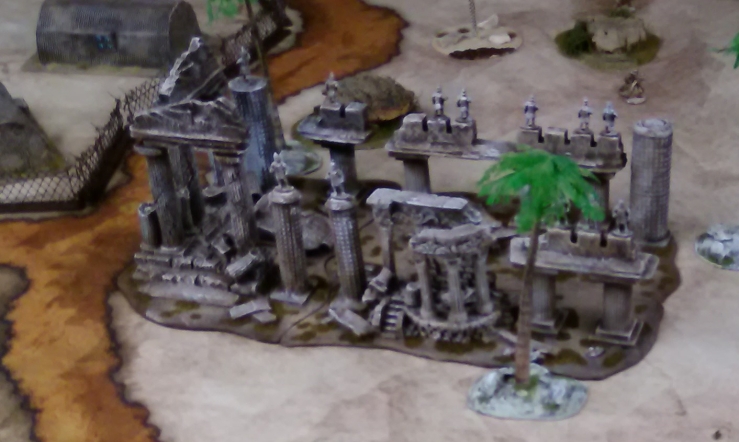 It has to be said however than despite running through the game on Thursday night, listing everything we needed and packing it ready for transport on Saturday we (well actually me) still managed to forget the rules! In all our years of doing games at shows, (and its a lot of years!) we have never done that, fortunately the tablet did have a copy on it from when we were experimenting with whether to do this in the future – jury decision is no, its too small and too fiddly.

In terms of the game itself it went really well; the basic scenario was three teams of LRDG moving in on an Italian airfield with the task of destroying the planes, ammo dump & fuel dump. The airfield was protected by a reinforced Italian squad with two squads of Afrika Corps off table ready to drive to the rescue at the sound of gunfire. The British players managed to sneak up pretty close before letting rip at the runway end of the camp with one team while another snipped its way through the fence and the third  distracted the Italians at the main entrance. There were a few tense moments; the squad at the main entrance took the brunt of the firing from the arriving Afrika Corps losing a couple of men before getting in to the camp to blow one of the trucks and using the other to escape with a couple of wounded chaps. The two other teams had a highly successful action; they eliminated the Italian troops, blew all three planes, the fuel dump and the ammo dump and escaped with minimal losses. 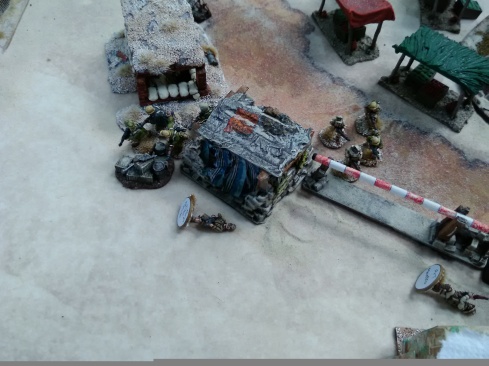 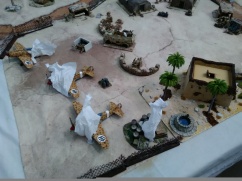 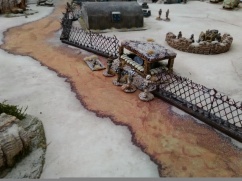 As for the show? Well we thought it was one of the best for quite some time, although having said that we’ve never experienced a bad one, but why? For us, we thought that the level of games quality was consistently high all round the show making it a pleasant experience for anyone just browsing. It must be said however, and this is just our thing, would some of these games every see a table top at the local club or even as an all day game in a hired venue? The range of traders was a good selection from across the broad spectrum of the hobby, everyone can complain their favourite wasn’t there but there will be other shows, and they all seemed to be doing reasonable business – on my one walk round the two traders I wanted to get to were serving several customers so it’ll have to be another show to buy those things I don’t really want anyway! The trade also seemed to have plenty of space to operate in, which must improve ones health and temper, and the hall never seemed to get too stuffy, but there again we were by the roller shutter doors! Also there seemed to be a good ‘vibe’ which is completely impossible to explain but there was a conviviality abroad as we chatted with visitors to the game and the brief amount of time various ones of us chatted to the traders. Maybe it was just the sun? Anyway roll on the next one!