For a little while now we’ve been doing random tweets about this project so it seemed like we ought to put some kind of context around the idea and where we hope to take it (if anywhere!)

Sometimes you get projects that are very much the ‘baby’ of one person in a group and everyone else is along for the ride; this is one of those projects.

The film itself, great though it undoubtedly is, didn’t make us (well me actually) want to rush out and immediately start gaming drug wars but obviously something settled at the back of the mind to resurface later on and at Games Expo 2017 it did.

I’d never been to Games Expo, holidays and shift patterns usually got in the way, so when I went I made sure I got the best out of the day especially as it was a day where we weren’t putting on a game so there was plenty of time to wander and enjoy what is a very different hobby presentation to even the bigger wargames shows like Salute. I played all kinds of games we’d never play at the evening meetings and indulged in my secret vice of collectable card gaming – shush, don’t tell Dave! Also got to see a number of producers who I didn’t know about; Rubicon – what a variety of WWII kits and so satisfying to complete, Second Thunder Games – had a lovely chat with Carl and bought the rules, Spectre Operations – and this is where it started to come together.

I have no idea who I spoke to on the stand but it was a long chat and out of it came the idea of instead of using the rules for the usual special forces shoot the shit out of insurgents/militia/revolutionaries maybe they could be used for something like…….I know, Mexican drug wars! It really was like that, a random conversation with a manufacturer I’d never heard off and an idea at the back of my head forcing its way forward. The road to it becoming a proper project was sealed with the in show deal of the rules and a box of the cartel figures plus a couple of agents.

Selling the game to the rest of the Group was a little more difficult after all we’re an historical gaming group and ‘modern’ to us ends at the 1980’s! In the end the consensus was “you organise it Ian and we’ll play test the rules and maybe help with some terrain”. Undeterred by this lack of enthusiasm I ploughed on and in so doing realised that this could grow into other arena’s with a bit of imagination; after all a major element of the film is the contractors/deniable assets who ‘assist’ the main character and these guys pop up all over the place in the real world particularly in the Middle East which got me to thinking about basing the figures (note this is before they’re even bloody painted!) – sand! Mexico has sand, the Middle East has sand – sorted! Off to B&Q for a masonry paint that will do the job sometime later – does anybody else do this? Go off buying peripherals before even proving out the main idea? Such was/is my confidence.

So it’s summer of 2017, I’ve got a set of rules we haven’t play tested, about a dozen figures and lots of enthusiasm but………. A plan I need a plan!

Research – bizarrely, film & TV came up trumps here, besides Sicario there is End Of Watch, Traffic, The Counselor, Savages and of course Narcos . Google images were extremely helpful with pictures of contractors and a whole load on the Mexican police.

Figures – the Spectre figures were great but clearly I needed more both in terms of gang members but also the ‘good guys’ DEA/FBI/contractors and Mexican police and it was here that the project nearly came unstuck because I had no clue of where to look for police and frankly it is a bit of neglected corner of gaming but just in the nick of time along came Tiny Terrain Models with their start up of Law Enforcers comprising 13 figures in body armour, a couple with riot shields, a couple with breaching kit, plus a dog (got to have a dog!) with different head gear – I chose the SWAT style because it was a dead match for most of the on line images of the Policia Federal plus their Cartel Members, 12 figures with various head styles to give a very intimidating bunch.  A couple more packs of Operators from Spectre and enough figures for the first stage. Since then I’ve found a couple of US manufacturers (Armorcast and Stan Johansen) who do some likely figures but the exchange rate and not being able to see the figures ‘in the flesh’ has made me pause for now.

Vehicles – nothing out there. Some resin vehicles but man these are not cheap and don’t really do the job. Then one of the guys suggested Poundland – what! Now this is a guy who ought to be an honorary shareholder because he can see stuff in the ‘tat shops’ that can be converted into something unique and usable that nobody else can. So just to say I’d done it I popped along and guess what? he’s right! For SUV’s for the contractors I found a couple of die cast cars which once they’ve got the ‘boy racer’ stripes removed and have been dry brushed heavily with sand look just the job, I found a box of 3 plastic police cars that took a bit more work but came out ok and a plastic helicopter for the ‘eye in the sky’. Are they exactly to scale? No. Does it really matter No. Were they only a quid each? Yes. Sorted. 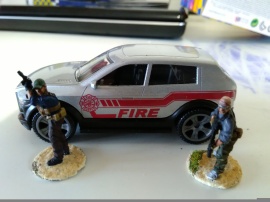 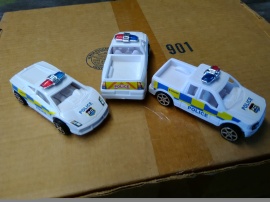 Rules – well I’d got the Spectre ones and as none of us are knowledgeable of the ‘modern’  period we thought it best to buy a another set to compare and contrast so we got Black Ops which we’ve yet to play. What did become alarmingly obvious was that there are loads of ‘modern’ rule sets out there – Skirmish Sangin, Ambush Alley, Tomorrows War, Danger Close, Evil Bear, etc, etc. It struck me you could spend an awful lot of money trying to find ‘the set’ but this time around I don’t feel confident enough to write my own set so if anyone has any advice to throw our way please give us a comment or tweet us.

Buildings – just bang down a few generic buildings and away you go. Well for starting up and learning the rules this will be ok but the more I thought about it the more I thought this needs to be some kind of urban chaos south of the border style; so cantinas, adobe dwellings, middle class homes, shops, motels, diners, banks, small industrial sites, posh house for ‘the boss’. A lot of buildings plus all the clutter for cover which would be a lot of buildings to store loose and a lot of time to set up a game – the WWII games already take ages to set up! Maybe there was some mileage in doing permanent terrain tiles with the buildings stuck down but make them as interchangeable as possible, this would also make it possible to take to a show at some point in the future? So out came the old engineering drawing equipment and plans were drawn and re-drawn and re-drawn again and then marked onto four 2′ x 2′ fibre board sections.

This approach worked well with our WWII city section produced by Dave Marshal many years back so why not again?

Who does a range of buildings that would meet this somewhat narrow requirement? Well the most obvious choice would seem to be Sarissa and the revolution that is MDF buildings, their Modern Retail, Retro, Industrial, City Block and South of the Border ranges offers models to fit the bill and a chat over the plans with them at Derby 2017 seemed to indicate a way forward but as of yet this is in limbo. Looking at others now from the vast array of manufacturers that is now the MDF explosion. This however is the killer at the moment, the summer holidays are approaching and I’ve booked time off to do the very labour intensive work that is the assembling and painting of all the buildings and fixing them to the boards. Decision time!

Bloody hell I thought I’d bang this out in a hour or so! Three hours gone and still more to type so I think I’ll call this Part I and do a Part II on the painting of figures and vehicles and our attempts at the rules – excuse for more pictures.